COVID 19
To ensure you good projections in this complicated time, our website remains open.
We are still able to deliver projectorlamps to you quickly.

Home > Frequently Asked Questions > How to configure and calibrate your video projector ?

Rarely is a video projector configured to perfectly meet your needs. You as the end user will have to do some adjustments in order to achieve the desired image quality.

The nature of these set ups depends on the installation, the use you're making of your projector and its features.

Luminosity is an essential element of the projector image's quality. It is being measured in lumen0 and consists of varying quantities of light in the grey shades of the image.

You should adjust your projectors luminosity before first using it.
If the luminosity is too high, black goes to grey; if it is too low, the grey s hades become undistinguishable.

In both cases, the image is dull due to a lack of details; you will therefore have to find the right balance.

The distance between your projector and the screen should also be taken into consideration in the adjusting of the luminosity.

Well adjusted contrasts will increase the quality of the projectors image by making the colors even brighter. Contrast balances shadow zones and light zones of the image. 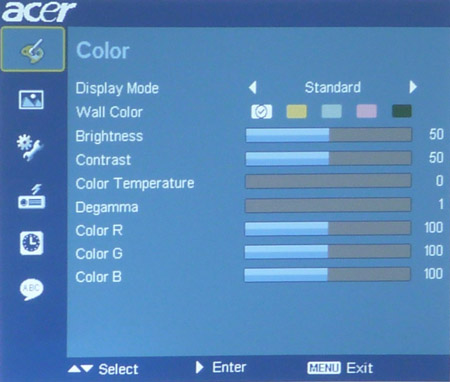 Some types of projector mounts, ceiling mounts in particular, ask for the projector to be installed upside down.
In this case you have to make a little adjustment in your projectors menu. 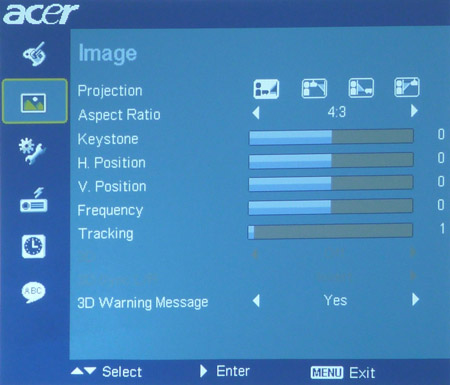 Calibrating a video projector consists of a rather complex image processing operation which optimizes the image quality.

This asks for sophisticated material and specific technical knowledge. The operation involves measuring, evaluating and analyzing a certain amount of parameters.

Calibrating your video projector increases the realism of the source image ( DVD, Blu-ray, etc) and its audiovisual performances.

In general, you won't need to calibrate your video projector, as the manufacturer does the necessary adjustments and configurations for a satisfying use of your projector.

Several software packages allow you to calibrate different parameters: luminosity, ambiant light, white and black point color temperature, gamma (tonal distribution of the image), etc.
A sensor communicates the measured results to the software on your computer. These are then being analyzed, and the necessary adjustments are made.

Before calibrating your projector image, the projector lamp should have been in use for about 100 hours. Thus you make sure that the adjustments are stable and lasting.

Infocus IN76, a video projector that is ready to use with its factory settings...